I made it in to school today for a couple of hours this afternoon and did some more work on my room. I think one more trip will take care of it... I don't know that I've ever spent this much time getting my room ready in the summer! (Darn you, #made4math!) 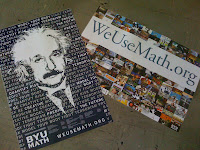 I started off by laminating a few things. I got these posters from WeUseMath.org. And they were free! 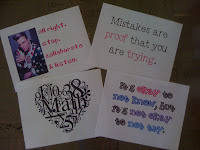 I also laminated these guys, which I found on #pinterest (ha!) and typed up myself. 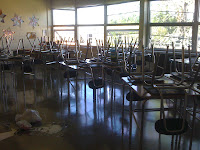 Then I played with my room arrangement for a bit. I'm thinking about going for groups of four desks as long as I can get them spaced out how I like them.  This picture isn't great, but they look like this (courtesy of @druinok). Anthony just wrote a blog post about how he's going to use this arrangement, too... and how he's come up with a "Cone of Silence" to use while testing. 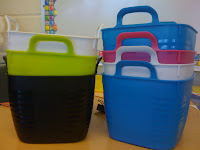 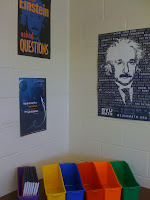 I found these lovelies at the Target dollar stop today.  I've seriously spent too much money there this summer! I'm thinking of using them to put supplies in for each group to use with INBs. You can see a glimpse of the border that I put around my whiteboard behind the bins.

I put my new Einstein poster up by 2 others (think I'll call it my Einstein corner) behind another Target find. Although I bought some crates to put the INBs in, I like these holders, too. And they're smaller.  I think they win! 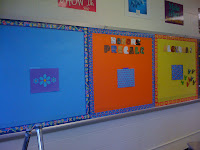 And I finished my board! Except for putting up the letters. I love the blue! I'm going to put worksheets in the folders for kids that are absent. I ended up just putting a long strip of magnet on the back of the folder and stuck it up there. Hopefully that will hold and I won't have to tape it.
Posted by KFouss at 7:30 PM