I decided it was time for a change.  Please add my new address to your Google Reader... um, I mean whatever it is that you're going to use to replace Google Reader (I'm going to try feedly).

Posted by KFouss at 5:46 PM No comments:

Posted by KFouss at 8:43 PM No comments:

Yesterday was fun. The kids had a good time, enjoyed some of the different things I had out for them to do, and ate most of the cookies. (But I still had enough to take to my daughter's softball practice last night, thank goodness.)

And today?  I'm exhausted. So happy that it's Friday and we have no plans this weekend!

I just wanted to share some of my favorite quotes from the kids on pi day.

"It's a word search. I don't need directions." (From a student who missed the fact that the non-used letters formed a quote.)

And now back to our regularly scheduled program.

Posted by KFouss at 8:53 AM No comments:

I keep telling everyone it's like Christmas for math teachers. And yet I think I'm the only one at my school who celebrates it.  (Everyone else seems to go along with me good-naturedly... and probably laughs at me behind my back. :))

Today is all about pi. I've been scurrying around all morning (while doing "hall duty" for the OGT) trying to make sure I'm ready. It didn't help that I was only here half-day yesterday because I had to take my kid to the doctor.  (His finger was swollen about twice the normal size and turning green. I thought I should give in.)

The majority of what I'm doing today was stolen from shared by Jessica (@algebrainiac1) at a Global Math Department meeting a few weeks ago. I adjusted/added a couple of things.

I'm setting up the following stations:

1.  Given 7 different size triangles, use yarn to measure their circumference and diameter. Find the ratio.  Then average the ratios.  How close are you to pi?


3.  Read an article about Albert Einstein (it's his birthday today!). Then try to draw a perfect circle. I'm providing a half sheet for them to draw on and a circle printed on a piece of laminate for them to check to see how well they did.

5.  Read an article about using tau instead of pi and then fill out a unit circle with tau values. (I'm only giving this to my precalc kids.)

Posted by KFouss at 7:43 PM No comments:

It hasn't been that great of a Friday yet and it's only 10 AM, so I'm really hoping things change.

First period precalc was fine. We started talking about vectors yesterday, though, and I've been doing too much of the talking. Hate that. But how else do you get through the basic terminology/notation/operations? Next week will be better because we'll start using the vectors.

I had to go to an IEP meeting during second period. (My plan period is from 8:28 - 9:18. It is seriously the worst time to have off because that's when parents can come in for meetings. I've been to more IEP meetings this year than ever!) The student in question is much brighter than he acts but has quite an attitude. Yesterday he refused to put away one of those little finger skateboards. I asked him twice, then told him that he needed to give it to me. He refused, saying that he would rather be written up than give it to me. Not a problem. I started to write him up and noticed him still playing with it. After telling him that even though I was writing him up he needed to put it away, he got belligerent and I had the special ed teacher in here with me escort him to the office. The mom at the meeting was upset that I hadn't let her know, even though this was 7th period yesterday and I knew I'd be seeing her 2nd period today.  She calmed down, though, and told me she'd "deal with him" later.

Then I messed up, which makes me feel bad. A friend of mine across the hall has a rough 2nd period class - there are a couple of boys that really act up and she's had a tough year with them. After my IEP meeting I was finishing up some things in my room when I heard a lot of commotion from her room. I wanted to make sure everything was ok, so I went over just to pop in. She was fine, but one of the boys was making some rude comments about her needing some mental help... and he just kept talking. I said something to the effect of, "Why are you being so rude? I don't even know you but I'm getting a bad impression." Probably not the best thing to say. He kept going off so I escorted him down to the office. (They weren't surprised to see him, so I'm sure he's a frequent visitor.) I just feel badly that I interfered in something that wasn't my business but I didn't want her to have a rough time and no help.

I apologized to her, but I'm going to head over with some chocolate here in a few.

Hoping that today gets better!


I can't end it like this. Some good stuff:
1.  I've worn sweatpants all week to school (it's our "OGT Training Camp Week"). And had a snow day on Weds.
2.  Next week because of the OGT I'll have a 2-hour period each morning to sit in the hall and give breaks to those people who have sophomores testing. And get a lot of work done during the day (which means no taking papers home to grade!).
3. My Intervention class is a weird variety of kids all working on different math topics. But they get along fantastically and we have a good time.
4. My precalc kids did horribly on their weekly review (this week was exponent rules). The good news? I decided that I'm going to make them do them again next week so I don't have to make up a new review for them. Less work for me! I'll replace their quiz score with next week's.
5. I apologized (again) to my friend across the hall and took her chocolates. She's not mad and thinks I'm dumb for feeling bad.
6. Next week is pi day and I found out today that Graeter's celebrates it by selling $1 pies.
7. I'm feeling better now.

It seems like it's been years since we've had a snow day. Oh, wait. It has been years! And then yesterday a miracle occurred. The snow that was predicted actually came... it didn't start until 10 pm-ish and continued through the night. Everyone knows that it's all about the timing, right?!

After being rudely awoken by my 6-year old at 8:30, I sent a tweet out to my classes:

Do some math on your snow day! Send me a pic of you doing math in the snow. Make a unit circle, calculate the diameter of a snow man, etc.

Tweet or email me your pictures before midnight. And have fun!

(I also posted it on schoology (our online portal) so that everyone had a chance to see it... not just those on twitter.)

It took a few hours (I guess they got to sleep in!) but then I started receiving some pictures. You gotta love when kids do math on their day off!

Here are some of the entries: 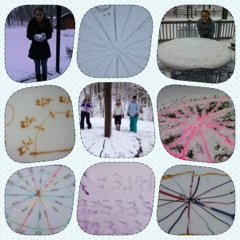 I did this a couple of years ago, too.

I'm bummed (but not surprised) that none of my Algebra 1 students did anything.

Posted by KFouss at 8:59 AM No comments:

Posted by KFouss at 7:44 PM No comments: