Girl walks in with two worksheets due yesterday. (She wasn't in class due to a concert, came later to take quizzes based on those worksheets.)

"Can you help me with this? I can't find how to do it anywhere."  (Rational functions... I'm pretty sure they're right in our book/notes where they were last quarter.)

Sometimes I wonder what these kids are thinking.

Today was a kinda crazy day with two assemblies. The freshmen/seniors went to the Holiday assembly first period and my 29-student precalc class was down to 11. (Because the performers had to go too.) The sophomores/juniors went 6th period, which cut that class from 19 to 3. Tomorrow is Grandparents' Day, so anyone with a grandparent attending (or presenting to grandparents) will be gone 2nd - 5th.

I told the precalc kids at the beginning of the week that they had two quizzes to do either today or tomorrow depending on what day they're here (or one each day if they're here both days). One was our weekly Algebra Review quiz and one was a solving triangles quiz using Law of Sines/Cosines.

Everything was fine. Kids who were here 1st period chose a quiz to complete (look how nice I am - I let them pick which one to do!). During my next class, one of the boys from first period stopped in asking if he could miss class tomorrow.  One of the social studies teachers is skyping with some soldiers in Afghanistan, which is awesome. I told him that was fine and asked when he was going to take his quizzes and he got a blank look on his face. Oh. Quizzes?  He left saying he'd ask another teacher if he could miss their class instead.

One of my freshmen told me in the middle of their solving systems quiz that she just couldn't get the graphs right. She just kept trying and erasing and trying again. I don't know if she was angling for some help, but I just told her to put something down... something's better than nothing!  It was a weird situation.

After school a girl stopped in.  She's not one to go out of her way to do math (actually, she tells me quite often how much she hates math and doesn't want to do it... and yes, this is a precalculus student) so I was somewhat surprised to see her here. But then when she started out by saying, "I know you said you wouldn't give us extra points, but. . ." I knew what she was after. She was concerned that her grade wasn't where she wanted it to be and asked if I would give her something to get more points. I told her that's what I've been doing this whole quarter. I also told her very nicely that if she was concerned about getting ready for the exam I'd be more than happy to go over stuff with her or look at old tests/quizzes to help clear things up, but I wouldn't be giving her anything for points.  (A friend of hers who I also have in class was standing in the doorway encouraging her to get help by going over mistakes. Bonus points for that one!) The girl walked out of my room without another word.  I don't think I won her "Favorite Teacher" vote with that one.

Feel free to move on in your reader... I'm just working through some issues I've been having with what to do in precalc for the next 8 days.

The stuff in pink is what I'd had planned to finish up with in precalc. We've been working through chapter 4 for AGES (since Halloween, I'd guess) and are finally finishing it up. I don't usually test over the whole chapter because it's been so long and choppy (Thanksgiving's in there) and I've done a bunch of quizzes in the meantime.

The problem is that I either have too much time or too little.
1. I can finish up with Chapter 4 stuff this week but that leaves me 5 days with nothing (and I'm not starting exam review that early).
2.  If I start something new (like solving triangles using law of sines/cosines) then I don't have enough time to do all that I want to do with it.
3.  Those last two days before break (the 20th and 21st) we have holiday assemblies which affect 2 of my 3 precalc classes and Grandparent's Day (which will probably affect 2 of my classes also).  That's why I'm choosing not to follow the schedule I have planned.

Now I'm thinking maybe I could skip Inverse Trig Functions (for now), which is 4.7 and go straight to the solving triangles bit, which could take at minimum 5 days. That would get me through the middle of next week and then leave a couple of days for kids who are here to start exam review.

Or review factoring, which they stink at.

The Polls are Open!

I know, we all thought that with November over we wouldn't have to worry about voting for a while. (Or all of those commercials... and phone calls... and mailings!)

But I'd like you all to take a second and make your voice heard.

Oh, and if you're interested in this awesome opportunity next summer, the date and place have been announced.  We'll be congregating at Drexel University in Philadelphia from July 25 - 28.  Please join us!!
Posted by KFouss at 8:27 PM No comments:

Finishing Up Sine and Cosine Graphs

So last week we started graphing sine and cosine in class.
Day 1:  Filled out a chart of values, noticed things, used Desmos to see what different transformations did.  (I wrote about it here.)

Day 3:  The kids picked up this picture (after taking a short weekly Algebra review quiz): 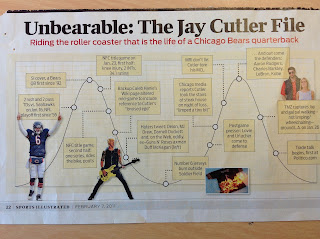 I found this in a Sports Illustrated almost two years ago and kept it (and was actually able to find it last week when I wanted to!  That's a miracle in itself.).  On the board, I wrote: "If Jay Cutler's maximum was 100% and minimum was 0%, write an equation that models his week."  I'm sure I could've come up with a much better lead but I was stumped... if you have any ideas please let me know!  It was a more interesting way of picking out the transformations and putting them together to write an equation than a randomly generated graph would've been.

We decided to use cosine with an amplitude of 50, vertical shift of 50, period of 6 days (I gave them dates for those maximum values that were 6 days apart) and applied a horizontal shift of 0.  But after writing that equation, I told them that, Oops - the graph actually starts with that first point which was two days before the maximum.  So then we had to incorporate that horizontal shift.

It was pretty fun (I thought).  Then I gave them an assignment to write equations for 4 graphs on their own.

Day 4:  (Today)  So now we're applying their equation writing skills. I put together a list of 10 different cities' average normal maximum temperatures (found on noaa.gov). They have to plot these values on a grid and come up with an equation that models that city.  They also have to do it for Cincinnati so that we can compare the two.

Day 5:  (Tomorrow) We're going to use my new bff Desmos to check people's models.  I'm going to have them plot the data points and enter the equation that was generated by their classmate.  Then I think I'll have them set up an equation with sliders (all you do is enter something like a cos (bx + c) + d  and you'll be given the option to set up sliders) to have them try and fit an equation.  Or something like that.... I'm still trying to refine my ideas.

So what's up for Wednesday?  Tangent and reciprocal graphs.

Posted by KFouss at 8:34 AM No comments: