Posted from Diigo. The rest of my favorite links are here.
Posted by KFouss at 8:37 PM No comments:

I told my Algebra 2 class at the beginning of the year that I wanted to try and do some stuff with their cell phones... unfortunately, I haven't really followed up with that! I used Textmarks during the first couple of months to keep them updated on the nightly assignment (if they needed it) but after we got out of September no one texted it anymore, so it went by the wayside.

Today, I finally told them to get out their phones to use in class. It's funny to tell them that - a lot of the kids gave me some weird looks like, "Really? Did you just say to get out my phone?" I sat last night and set up some multiple choice polls on PollEverywhere. You can set up an unlimited number of polls with at most 30 responses for each one (for free). Then, about 5 minutes after I gave them their review sheet today, I posted the first poll. 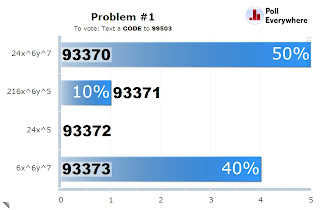 I asked them to text in to vote for what they thought the answer to the first question on the review sheet was... and it looks like it was a good thing that I did that! (The correct answer was the first one.) Then I wrote the problem on the board and was able to explain how to solve it correctly.

It didn't go perfectly - but does anything ever? We had shortened classes today because of an early dismissal, so after going over some problems from yesterday's assignment there really wasn't much time for the kids to work and text in their answers. What I did like best about the activity was that the kids were able to see some options for answers and talked with each other about which one was right and why.

As usual, some of the kids didn't participate - probably both because they didn't have phones and just didn't want to. I'm ok with that; I think the kids that tried enjoyed it and hopefully fixed some problems before tomorrow's test. If I do this again (and I probably will) I'll have to figure out how to get more kids involved. I may just need to reserve a cart of computers and let the kids vote via the internet.

We'll see. But it was definitely a different exercise for the kids! (One, who normally isn't all that excited about things, made a point of asking me what website it was and seemed to think it was pretty cool. :) )
Posted by KFouss at 7:27 PM 2 comments:


Posted from Diigo. The rest of my favorite links are here.
Posted by KFouss at 8:38 PM No comments:


Posted from Diigo. The rest of my favorite links are here.
Posted by KFouss at 7:38 PM No comments:

Day 1 of transformation bootcamp using GSP today. I think it went ok - it took a while for the kids to settle in and work on their own. One boy literally sat there for 20 minutes doing nothing. Then he said he didn't know what to do (try reading what I gave you to read and do on your computer!). Hoping day 2 goes better... and then on Friday we're going to use Kate Nowak's Golf Activity.

I was kinda freaking out last night because I couldn't find the GSP Intro that PersidaB sent me on twitter. But I did a search online (if you haven't tried searching specifying filetype in google, you're totally missing out!!! do your search, then type filetype:doc or ppt or whatever. Check out the advanced options if you need to) and found something that I ended up pretty much copying and using. I can't find the link right now... I'll keep looking!

On a side note, I still don't have my tablet back (haven't seen it since September). I was talking with another math teacher at school who's going through the same thing (though his gone after mine) and it sounds like there are some tablets down in the computer people's office that have been lost in the shuffle. It's entirely possible that mine is down there. Grr.
Posted by KFouss at 9:39 PM No comments:


Posted from Diigo. The rest of my favorite links are here.
Posted by KFouss at 7:35 PM No comments:


Posted from Diigo. The rest of my favorite links are here.
Posted by KFouss at 7:36 PM No comments:


Posted from Diigo. The rest of my favorite links are here.
Posted by KFouss at 7:35 PM No comments: