Posted by KFouss at 8:35 PM No comments:

I don't remember if I mentioned it or not, but when we finished up trig in precalc a few weeks ago I had my students define trigonometry in a tweet. We did it on paper because they don't all have accounts (but quite a few do!) and I compiled them into a powerpoint.  Here are the results.

#Trigis
View more presentations from Kristen Fouss.
Posted by KFouss at 11:56 AM 1 comment:

Posted by KFouss at 8:35 PM No comments:

Quotes of the Day

We've been learning about sequences and series in Precalc (along with a foray into mathematical induction, which is always fun) and for the past couple of days have been investigating Pascal's Triangle.  I got a neat exploration from Ann Gregson (who has since left the math world for elementary tech) and also gave the kids this activity from the Math Forum where you color the triangle according to a specific rule. (Because you use 5 colors, it's mod 5 arithmetic. Neat.)  I ended up with a bunch of neato triangles that I taped together, laminated, and am about to hang on the wall.  Or at least I'll hang it once my student aide cuts 'em out and assembles next period!

There was some confusion with the coloring because it appeared that the pattern would continue to be a series of identical-ish triangles.  Like this: 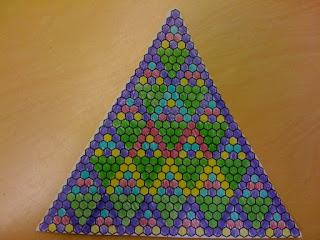 But instead there was a funny block at the bottom all the same color: 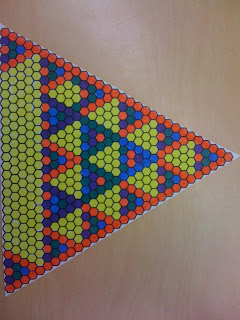 (I can't figure out why this picture is sideways. Oh well.)

Here's the arrangement of the correct ones: 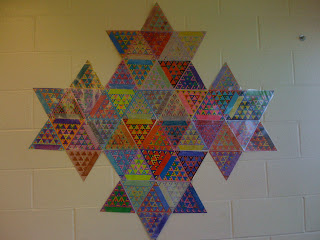 The best quote of the day was from a student who was looking closely at the correct triangle.  "That makes sense... it would just be a giant fractal."  YAY!  :)

(And then another favorite quote from today, "Did you get my email?  (Me:  No.) Good, because I didn't sent one."  Oh, teenagers.)

Posted by KFouss at 1:18 PM No comments:

We're heading back to school tomorrow for a whopping 38 days of school (including exams). Today is the first day I turned on my computer to do anything that has to do with school. It was a nice break!

I'm trying to do some catching up on my Google Reader, so I thought I'd post some links that I enjoyed...
1.  Lisa Henry added a CCSS page to her blog.  It's much better than mine right now. :)

2.  I saw this a few weeks ago but don't think I mentioned it. Dan Meyer started a website called 101 Questions. It's a take on the #anyqs convo on twitter.

4.  Kate Nowak posted some videos that go through the majority of an Algebra 1 course. Wow. (Here's her description of why.)  Our tech guru in my district would like me to look into the idea of the flipped classroom; these could be an amazing resource. Thanks, Kate!


That gets me through about half of what I haven't read lately. And I just realized that I promised the kids new seating charts tomorrow. Dang. I hate making seating charts.