After hearing about INBs (Interactive Notebooks) from Megan Hayes-Golding this summer at TMC, I'd decided I wanted to give them a try in my Algebra 1 classes.  I was looking forward to the organization that it would provide the kids.

So now we're a full week in, and I'm sorting through my thoughts.
1. I think that after we all get the hang of what to put where (and how to number pages), keeping the INB will be good for the kids. We just all need to get "on the same page". (Ha!)
2.  The tape that I bought before school started is going fast. Geesh! Who knew that a bunch of freshmen would use up a roll of tape in no time?!  I got the cheap ones from Walmart when all of the school supplies came out, and they're obviously teeny little rolls. I'll need to do a little research to see what I should get.
3.  The kids are enjoying the hands-on aspect of the INB.  (They call it "arts and crafts".)  But they've been pretty good about keeping their space nice and neat and cleaning up after themselves.
4. Things take a lot longer to get through when you have to cut, tape, and write in the table of contents. But for someone who had trouble filling a class period at times, that can be a good thing.
5. I still need to get more into foldables.  I've done a few with my Honors Alg1 class but none with my Integrated. It would probably help them more, but I feel like I'm rushing with them. I think I just need to get my feet under me first.
6. I've been keeping an INB for both classes but keep losing track of what's going where in the table of contents. So today I made some big posters to hang on my whiteboard so I can keep track of everything (and help the kids keep a list, too).  This is just yellow paper from the big rolls that are around that I laminated, wrote on with dry erase marker, and hung on the board. Hoping that'll help us all. 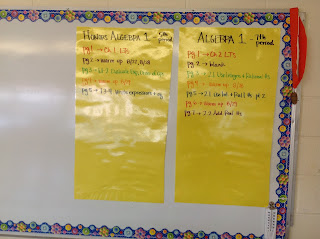 7. The left-hand page is currently being used for warm-ups. I think it was Julie who said that was the hardest part of keeping the INB. I didn't get that until now.
8. A boy in my Honors Alg1 class hasn't made it to class yet; apparently he has some anxiety issues and doesn't want to come to school. I've been told he's very bright, so the material we've covered (which most of the kids knew anyway) shouldn't be a problem. My issue was what to do with his INB. I'm thinking that I'll go ahead and print out copies of my notes and tape stuff in for him so he can jump right in with the rest of the class.  But what happens if someone moves in halfway through the year? Just pick up where they come in?
9. I have a special ed aide in my class with me every day 7th period who is so on board with the INBs it's ridiculous. She's coming from an elementary school and I think this is right up her alley (but I'll take all the support I can get!). She said she met with some supervisor yesterday at the Admin Building just to talk about how things were going and told the person all about me and my class and the notebooks.


I've had problems in the past with keeping up with things. I get an idea, jump in, and then it fizzles after a bit. I'm determined not to let this go.

I've been trying to figure out why I've felt so unprepared the past few days after working so much this summer on school stuff... and then I realized that I'm prepping warm ups, notes, and exit slips for my Algebra 1 classes (in addition to keeping the INBs ready to go). Last year I just had the notes.

And so now it all makes sense.
Posted by KFouss at 9:29 PM

Email ThisBlogThis!Share to TwitterShare to FacebookShare to Pinterest
Labels: INB

I wish you the best of luck and hope you're able to stay on top of it. I look forward to following your progress using notebooks this year.

My last couple years of teaching, interactive notebooks were all the rage in my district, especially for science. I used them, but I felt like I didn't really make the most of it. I'm curious to see what pitfalls you encounter and how you overcome them. I'm also curious to know over the course of the year what value you think they bring, especially in light of the effort you're expending to incorporate them into your classes.

Best of luck to you!

I'm feeling a little overwhelmed with my INB's. This is my first year and I'm not completely satified with how things have gone so far. I'm a little overwhelmed by the number of students who have been absent and keeping up with the entries. I started writing mine on the whiteboard today like you did, but I like your idea of the laminated paper better. I just needed a way to keep it straight. Oh well, I guess I'm learning as I go.

Yay! I'm glad you're basically happy with the INBs. Here are a few of my thoughts on issues you've raised. Of course, YMMV.

1. (RE: on the same page) Expect to spend most of the semester answering "what page does this go on?" I always put the page number on the whiteboard when giving notes there. Seemed to help

4. (RE: cut/tape/etc is time consuming) The INB definitely slows you down. But it was definitely Julie who said that can be a good thing.

6. (RE: Keeping a running TOC on the board) The board summary is gorgeous! As someone who also doesn't carry through with ideas, I can suggest you assign a student to be the caretaker of the board-TOC. It totally helped me out. Also, when it comes time to grade selected pages, you can star them on here.

8. (RE: kids who join class late) For anxiety-kid, yeah, I like keeping one ready for him. For other kids, I just have them pick up where we are. An alternative is to have them count out a right page for every week or unit they missed and fill in big ideas. My 3rd idea is to have the kid go through your INB (you ARE keeping a master book, aren't you?!?!) to pull out big ideas. Kids coming late is a tough one and I dealt with it all the time. No great solutions there.

I've either snapped a picture of my page OR a student's page at the endm of class with an app for class blog or emodo, u can upload it immediately and title it INB pg # with date - absent students have access!

I was wondering about new students myself - thanks Megan for saying let them pick up where they arrive.

First day of school tomorrow! I am starting INB's and am super excited, but also a bit nervous. I plan to use my blog as a way of keeping myself on track. LOL.

@bstockus - I'm interested, too, to see how much of a difference they make in class. Are they worth the time? We'll see! :)

@Mrs. H - I honestly chose the paper so it would stand out more. I don't know that the kids pay any attention to stuff written on the board. The yellow was bright.

@Megan - Glad to see I'm not too far off of things. But like you said, it's the left side that's going to get me. I made one for the late-comer but won't be doing that for any other new kids. And yes, I'm keeping one for myself! :)

@Pam - I like the idea of the pic but I'm thinking we could just use another student's as a model, too. Hoping that absences won't affect too much!

@Mrs. Fisher - good luck tomorrow! I love the color and energy of your blog. :)