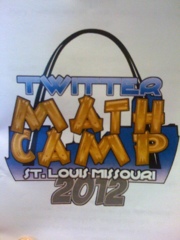 I'm not even sure where to start. I just spent five days with almost 40 people I'd never seen before representing 19 states and 3 countries. I wasn't sure what to expect and was nervous about talking to people that I didn't "know". I don't meet people well; I tend to be more of a watcher when I'm not comfortable and there just wasn't time to for that. But this was a stage of knowing people that doesn't happen much. My goal was to try and just be myself from the get-go.

An AMAZING almost-week with some AWESOME people.

There were people there that I tweet with often and some I didn't know existed. After a little bit of awkwardness (how exactly do you start talking to people you "know" but don't really know?) everyone gelled very quickly.

Some observations that I was able to make quickly:
1. Julie is really as peppy as she seems on twitter. I totally understand her using ALL CAPS and lots of !!!!
2. Sam's taller than I imagined. But he's also nicer, funnier, and not in the least bit condescending when explaining to me what he was doing to solve problems that I couldn't figure out. And he loves nachos.
3. Hedge is what-you-see-is-what-you-get, just like on twitter. She's generous, funny, quick-witted, and has some crazy obsession with torturing Seiler. But we all knew that.
4. Lisa is the ultimate organizer. She had folders labeled with maps for drivers, she had us scheduled to the minute, and she thought of stuff that the rest of us never would've.
5. Sarah's very passionate about what they're doing in her school and it sounds amazing. She's also funny, loves to sing, shares my sweet tooth, and is disturbed by the sound of the air conditioner switching on in the middle of the night.
6. Shelli's generous, sweet, and I wish she lived a lot closer so I could pick her brain on stuff! Guess I'll just have to stick to that on twitter. :)

These are just a few of the amazing people that I finally met this past week (excluding Lisa and Sarah, who I've met before). But I'd be remiss in not mentioning Megan (who I really wished I'd talked to more... She always comes up with the funniest, most perfect comments!), Simmons (I could watch and talk to him for hours AS LONG AS HE HAS HIS CLOTHES ON), Rachel (the cutest ukulele player I've ever seen), Colin (the best Canadian dj when the connection works!), Marsha (who is going to really start tweeting more, right?!), and Jami (who I'm so glad decided to make the last-minute jaunt to Cincy and ride along with us!). But what about Anthony, Glenn, Bowman, Sean, Kate, Pam, Jamie, Max, James, Alex, David, Troy, Elizabeth, Karim, and Mike? (In no certain order! :) )

I've got a bunch of notes on actual sessions that I need to sort through and blog about just to make sure I remember. But for now I've got unpacking and laundry to do and real-life to get back to.

To end this on a fun note, we were lucky enough to hear an original song during our closing session performed by Sean, Rachel, and Bowman. It may be a little tough to understand (I'll post the lyrics when I find them) but you should be able to see the sense of community that was built in this short time that we're all going to miss.

The lyrics have been posted!

I sat alone in my class, Hoping my students would pass,
Prepping was kicking my ass
But help was on the way
I started searching the net,
To find a way to connect
Found teachers I’d never met and I was on my way
Dan’s blog was poppin',
G-Reader, feed not stoppin'
Each day, I would drop-in
Guess it’s time for hop in!


Oh holy crap can it﻿ be,
Nowak responded to me,
Blogging math celebrity,
She’s twitter royalty
I beg, and borrow and steal
No reinventing the wheel,
What are these urges I feel?
Nerdy math sex appeal
Hal-lo-ween was awesome
Dull worksheets,
I could toss ‘em
My i-deas could blossom
Now it’s time for Math Camp, baby!

Hey, I just met you, all in person.
Twitter Math Camp,
this was the first one
It's hard to teach right,
in i-so-laaaaaation,
So here’s some PD,
just like va-ca-tion

Email ThisBlogThis!Share to TwitterShare to FacebookShare to Pinterest
Labels: TMC12

I'm honestly not worthy of the nice things you said about me, but meeting you in person was one of my ultimate #TMC12 highlights. I'm still not happy with you for buying my Batman ticket, but I'm willing to let it slide... THIS time.

I think my favorite thing was how we all acted like we've been teaching together forever.

I'll try again. I'm intrigued by the enthusiasm all of you have for your time spent together. As someone who is responsible for designing PD, I am constantly looking for those characteristics that make for a good PD experience. What about your time spent together made it so awesome? How do we replicate that experience when it comes to PD in our district? And finally, when you think about your learning over those five+ days, what made it so compelling and how can we, as teachers, create learning experiences equally as compelling for our students?

Wow, Cary, so much to think about. How about you let me process for a few days and then I'll write a whole blog post addressing that?

I still need to go through my notes from the actual sessions, too.

What about your time spent together made it so awesome? We were able to start up mid-conversation because we're an online community. No need for introductions other than, "I'm @whatever on Twitter." I don't know how you create that with a brick-and-mortar community.

How do we replicate that experience when it comes to PD in our district? We chose to be there. 100% self-selected attendance does wonders for attitudes.

And finally, when you think about your learning over those five+ days, what made it so compelling and how can we, as teachers, create learning experiences equally as compelling for our students? The "My Favorite" sessions are something I imagine replicating with colleagues. You get 5 minutes to present a favorite thing to a team. That thing could be a class management strategy (@misscalcul8 shared "Two Nice Things!"), a website (@colinmac10 shared socrative.com), or a math algorithm (@calcdave has a great way to visualize multiplying matrices).

Jealous! So very jealous. Looks like an amazing time!

You are too sweet! I wish I lived closer too - you are such an amazing person and I wish I had the chance to visit with you more.

I don't know about you, but when I started writing my post, I realized there was no way to really express the enormity of what was TMC12. Such an awesome experience and I'm so honored to have been a part of it.