(Had to switch from putting the week number because I've totally lost track!)

I have a couple little things this week to show off (not that I'm trying to make up for missing last week or anything!).

First, I bought some modge podge (which spell check doesn't like at all!) and made some magazine-wrapped feather-topped pencils. In the meanwhile, my daughter took care of a small can of Pringles, so here are my fancy pencils in their new little home! 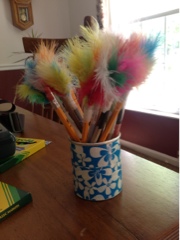 I'm still trying to figure out what to do with the big black chalkboard that I never write on in my classroom. @druinok suggested I either cover it with a fun fabric or wrapping paper to help liven it up. The kids and I went in to school a couple of weeks ago and I did the wrapping paper thing, but I'm not sure I'll keep it. 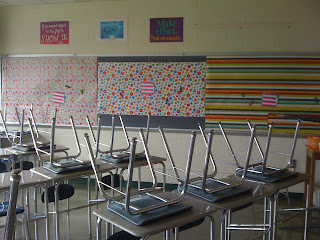 I definitely need to re-do the middle section; that roll was a little too short! I'm either going to leave it blank but separate into three sections using border or put up some plain paper separated by border. Today I made some letters out of my fun scrapbook paper for each class.

I made big (3"- 4") letters in word using the Ice Age font, cut them out, traced them, and then cut those out. It took me a little longer than I thought it would despite - or because of - my two helpers, one of whom is still figuring out the cutting straight lines thing and really can't do curves. But she wanted to help! 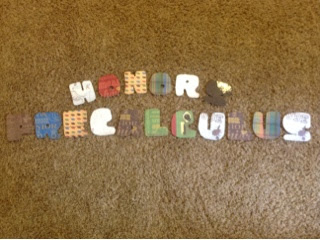 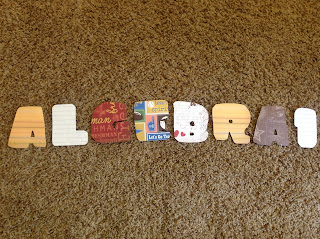 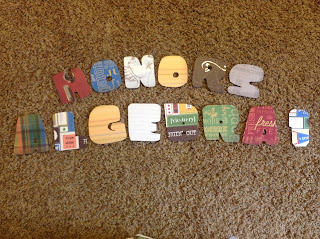 I may run up to school today with the kids to get my letters up and figure out what to put them on (plain paper or no paper at all).  I also need to stop at the DMV and get a new driver's license... mine disappeared somewhere in St. Louis last weekend!   Oops.

Email ThisBlogThis!Share to TwitterShare to FacebookShare to Pinterest
Labels: #made4math

I need to get some of the smaller Pringles cans! I love that! And your letters turned out so well!!!

If I recall, you said your chalkboard was magnetic, so you could laminate some border and put magnet strips on the back to help separate the sections.

I totally think the board should be either a solid color of paper (maybe three solids) or small print. Then you can separate with borders.

The busy prints can be distracting and hard to play off of with whatever you put on top of them.

Love the letters you made!

Love the decorated pencils and Pringles cans. Now I know what I need to do with some empty Republic of Tea cans!

Regrading your chalkboards, my husband has found, that no matter how old students get, they love, no, BEG to do their work at the board. Then they take pictures of each other's work for notes and to help with any work they do at home.

Cover up the boards with student work? I'm wall to wall covered with kids' stuff. We'd use the ceiling if we could reach :) The small cans are so cute!

I really like the letter! You could always attache magnets to clothes pins and use the space to hang student work.

Thanks for the tips!

Concerning the chalkboard, I would love to have a small one in my room. My suggestion: embrace it as a chalkboard! Chalkboards are "in" right now; there are lots of examples on Pinterest. Here is a link that shows them being used:
http://dornob.com/dry-erase-diy-slate-black-paint-for-full-wall-chalk-boards/

And here is a DIY site that shows some others:
http://www.sheknows.com/home-and-gardening/articles/954149/make-chalkboard-paint

Here are three of my own thoughts:
1. Throw a border around it and use colored chalk to put up an inspirational quote of the day.
2. Use it for grafiti. Put a topic on top of the board every Monday and let kids comment.
3. Post your objective, homework, etc., there to free up space somewhere else.