I have been a blogging fool this week.  Want to know why?  I have 93 trig identity quizzes to grade... and I don't want to.

Some fun things I've done in class lately that I hope to remember for the future...

1.  In Precalc today I told the kids I was taking a day off.  Yesterday we talked about Angle Sum and Difference Formulas.  I actually made a fun powerpoint a few years ago from a story our calc teacher told me.  It's really helped the kids remember what goes where.  Here it is!


But today, after going over homework questions from last night, I gave them a sheet that basically said "Using our formulas from yesterday, find a formula for each of the following:  sin 2x, cos 2x, tan 2x."  And then it has some problems at the bottom for them to work out.

It was interesting to see who started to try and figure things out and who waited for me to tell them what the answers were (which I didn't do).  Some of the latter kids gave up on me and got the formula from their friends.  Some actually started thinking (imagine that!).  I made it around to each of the groups that had formed and checked formulas and work... by the end of class everyone had the correct formulas and were on their way (if not finished) with the example problems.  Now I just wonder if I could do that with the half-angles, too.  Hmm.

2.  In Algebra 2, things have gotten a touch better.  Yesterday was a much more productive day - it seems that they've stopped fighting me a bit on learning new stuff that takes some work.  Today could be interesting - we're going to start graphing polynomials (after determining degree, LC, zeros, y-ints).  On a Friday?!?  I must be crazy.

One fun thing we did in Algebra 2 last week was play Simon Says.  We had just finished talking about what the different polynomials look like when they're graphed (based on degree and leading coefficient) and I was throwing questions at them so they could show me with their arms what the graph would resemble.  Someone brought up the idea of Simon Says, and off we went!  I stood on a stool in the front (so I could see over everyone... I'm not very tall!) and had the kids stand up. Once they were wrong (or if I didn't say Simon Says) they sat.  Of course there were the kids who were wrong on purpose (I hope) the very first call so they could sit, but we went for quite a while until I called a tie. 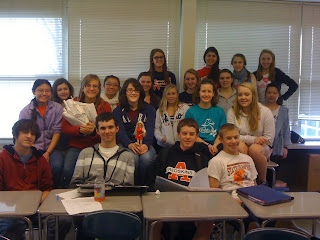 3.  In Algebra 1 we've spent several days talking about Exponential Growth and Decay.  I started out giving them the Million Dollar Question and then asked another one about the number of mice created by a four mice who double in population after 2 years.  Then we were able to come up with a formula to use and did some graphing.  Yesterday I showed them a clip of Mythbusters in which the myth that a paper can be folded only 7 times is addressed... I gave them each a 6" x 6" piece of patty paper and had them fold it (one boy had 8 folds), then had them chart the area and number of layers after each fold. We were able to see the exponential decay of the area and the growth of the number of layers.  Last year I did this same thing with my Algebra 2 class (talked about it here and here) and had saved the big piece of paper. Today, because it's a crazy 50 degrees on February 3, I took the kids out to the football field so we could see how many times they could fold a something x 39' piece of paper. (They ended up with 10!)  This is a picture of my goofy group and their 1024-layer paper.... see the 4 boys in the front?  And the 16 girls in the back?  Oh my.

Just wanted to thank you for the sinbad and cosette slideshow...my kids LOVED it and almost everyone remembered their formulas on the test! (but I did have trouble explaining why cosette being the only one unhappy led to the tangent formula...we just decided that she was unhappy that she had to memorize that formula.) Thanks again!