There are three things I really like about being a teacher.
1.  Pens.  I love buying new pens in the summer! But I must've done a stinky job of it this past year because I don't have any that I like right now. Time to go shopping!

2.  Laminating.  I don't know what it is about the laminator but it makes everything so nice and shiny. I spent some time with it today. :)  (And will probably have more to do tomorrow!)

Aside from the pen fetish, I really had a point to make in relationship with laminating and fonts... I swear.  We're in the midst of exam week, which is one of my favorite weeks all year. It's like a lot of stuff around here - there's a ton of prep work to get ready (exam reviews, exams, etc.) but once it's here it's all on the kids. Yesterday we had our first period exam (prefaced with a 40? minute review where the kids crammed like crazy!) then 35 minute review periods for the rest of the day. By 2:15 I was bored to death. I'd gotten stuff organized and copied for the next couple of weeks, I did a couple of sudoku puzzles, I read a book for a little while, and played online. Whatever I could do to keep myself occupied!

Today hasn't been any better timewise. We have a 2-hour optional review time first thing in the morning (Yes, optional. I'm sure you can imagine how many students are here studying! Ha.) followed by a 100 minute exam which was my plan period, followed by another 100 minute exam (they're working right now). This schedule will repeat for the next two days... and then we have a work day on Friday on which I'll have sooooo much to do. Not. (Not that I'm complaining!) 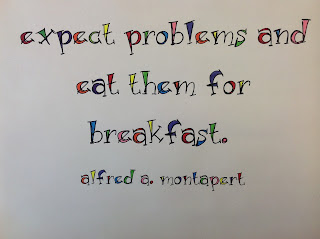 One thing I did actually do yesterday was look up some new quotes to put on my side board. I've had the same ones up there all year and need a change.  I found a website called BrainyQuote that I took some from, copied them on word documents with some cute fonts (ahem), and colored and laminated them this morning. My original plan was to post them like I did first semester, but now I've found so many good ones that I'm thinking bigger.

Several weeks ago I read a blog post where Rebeckah Peterson described how she put the name of a mathematician on their board when they start a new unit. The kids fill in information about that mathematician as they find it for extra credit. I loved the idea and thought about starting it next year, but it also got me thinking about doing the same thing with quotes.  So now I'm considering posting a quote each week (?) and asking the kids to post their thoughts on it. Do they agree/disagree? How is it relative to their life? And what can you find out about the person who wrote it? 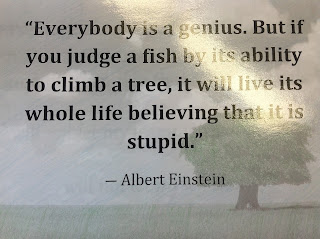 If I do this, a couple of details I need to work out....
1.  Do I do one per course? Or one for everyone?
2.  I've got bulletin board paper covering my chalk board right now. Do I let the kids write on it and recover it often? Or do I take it off and just let them write on the chalkboard? (Yuck. Hate chalkboards.)  But I could keep up my cute boarder.
3. We also have an online portal I could use to let the kids give me feedback. Do I just do it instead? But it would be nicer to be able to see what other people are doing in class. OTOH, this way I see the results by class (because I have 3 precalc classes of kids). 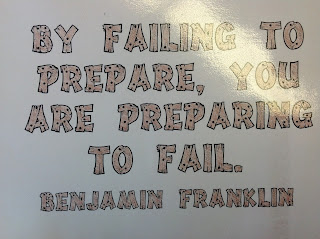 I use this blog a lot to just get my thoughts down "on paper". I hadn't even considered using the chalkboards until I typed it, and I think that's they way I'm leaning right now. But if you have any input, I'd love to know it!

ETA:  Trever Reeh suggested I try Wallwisher. I think I could embed it on Schoology.  Thoughts?

Email ThisBlogThis!Share to TwitterShare to FacebookShare to Pinterest
Labels: quotes

My guilty pleasure is the label maker!

My favorite pens are Marvy by Le Pen...so sleek and they write smoothly!

My favorite font is Joyful Juliana :)

I'm heading to Staples today after school to do some pen shopping!

@Carey, for some reason your comment was classified as spam. You're not a spammer, are you?! :)

I haven't ventured into the world of label makers. I probably shouldn't. :)

OMG the quote idea is brilliant. Absolutely brilliant. I think I will incorporate that next year.

I like having the kids write on the chalkboard (or in my case, whiteboard)...but I hate that I have to sacrifice a whole whiteboard for it. It's a sacrifice I'm willing to make, but if there were another option, I'd probably go for it. I'd like to see if I can get another whiteboard put up on a different wall next year and dedicate that wall solely to math history.

Now another question for you--are you restricting this just to Pre-Calc, or are you opening it up to other classes, too? I just opened it up to Pre-Calc, but my Algebra II kiddos seem to be pretty intrigued by it. I just don't know how that would work logistically...thoughts?

I ended up keeping my paper on the board and providing post-its for the kids to use. I thought that would save me the time of re-papering every week.

After one day, the response has been really good. I see 9 different post-its on the precalc quote board. I made one for Algebra 1, too (I have 2 sections) but forgot to tell them about it yesterday. I also created a "tweet me" board for them to add to; they had a good time yesterday "tweeting" back and forth (and retweeting, and adding tags).

If this keeps up it was definitely worth my time last week! :)

So, 2 things: first, I totally want to incorporate your idea of quotes next year. I think instead of just having students "research" the mathematician (i.e., go to Wikipedia and copy the first paragraph on the fellow), I will have them do three tasks: (1) Rewrite the quote in their own words, (2) Defend why or why not they agree with the quote, (3) Write something cool about the history of the mathematician on the whiteboard. I'm really excited for this. :) Many thanks for your inspiration.

Number two--can you tell me some more about your "Tweet Me" board? I just started a twitter account for Pre-Calc. I haven't used it much yet, so I was wondering what some of your favorite uses are for it.