I'm at the point in Precalc where I would normally give a quiz over trig values without using a unit circle. But with today being the last day before Thanksgiving I didn't want to cram in a quiz without knowing they were ready. And I definitely didn't want to move on with something new!

So I pondered.  I have a unit circle turkey coloring page that I could give, but that would've taken about 10 minutes... and I definitely didn't want to leave them 35 minutes of free time!  I also had a couple of other fun-type stuff that I could give, but again, nothing that would take the whole period.   So I decided to set up some stations and give the kids some options.  They had to choose at least two options plus one required one.  I gave each of them a quarter-sheet with the stations listed so that they could keep track of what they'd done (and I could make sure that they did what I asked them to do!).  Here's what I ended up with: 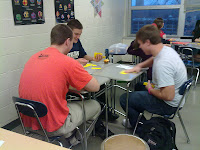 I copied a deck of cards (cut them with the help of a student aide - thank goodness for her!) and set up 3 stations of max 3 kids each.  Standard War rules apply.  (Some of the boys had a bit of an argument during 1st period and a bottle of water was thrown. Silly boys.) 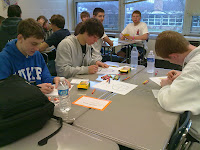 This used to be Radian, the Snowman, but that was when we didn't get to the unit circle until December. I altered the picture a bit so that the kids could make a turkey out of it. I'm going to post a bunch of them on the wall so that they can enjoy the pretty pictures. :) 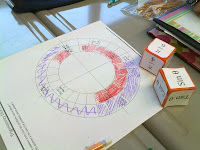 Station 3: Trig Dice Game
Several years ago at an OCTM conference I picked up several sets of 1" foam dice. On half of them I taped the 6 trig functions and on the other half I taped special angles.  The kids roll one of each, answer the question (correctly, hopefully) and move along the game board. I usually give them pieces to move around (or have them use a coin) but today I pulled out my white-board crayons which erased awesomely on the laminated game boards.

Station 4: Trig Dot-to-Dot
In theory I like dot-to-dots, but this one didn't work out so well.  There are unrationalized and rationalized answers on it, so the kids weren't sure which ones to use (eventually we figured out it should've been the rationalized ones).  And the answer is a picture of a barn.... not quite so obvious.

Station 5:  Row Game
I definitely like the row games - it's basically two columns of problems but each set of problems has the same answer.  The kids didn't think they were so much fun, though.

The required station that everyone had to do was to fill out a unit circle in less than 4 minutes.  It's amazing at how quickly they're able to do this now!  So cool.  And very neat to see how proud they are of themselves when they get it done the first time (or faster than the last time).

Two other activities that I thought about including:  a Trig Crossword Puzzle and some Trig Cut-Ups.  Maybe next year.

I am interested in understanding how you pick the stations....do you have different levels of difficulty?

Do you assign the starting point to go with their ability and then let the stations increase in difficulty?

@takefive -
As I recall, this was kind of a last-minute thrown together deal. I pulled out all of my activities that fit what we'd been doing in class and gave them those options. I had too many kids (31 - 33 in each class) and not enough for them to do to try and assign various starting points. Plus, I wanted to let them choose what to do; if kids didn't like to color I didn't want to force it. And if kids wanted to work on their own there were places for that, too. The kids enjoyed the freedom of choice and still got some nice review work in!