A month or so ago I was reading Square Root of Negative One Teach Math where she referred to using something called Conics Cards in class with her Algebra 2 classes.  (Here's her original post and here's a follow up.)  I'm not a big fan of conics (zzzzzzzz.....) and seeing as how we have 10 days left of school, I wanted to find something to spice 'em up.

So I e-mailed Cindy Johnson, the lady who Amy gave all credit to for making the cards.  She was kind enough to e-mail me lots of documents:  the cards, the assignments, the NCTM description.  Amy helped out with even more information.  I copied, laminated, cut, assembled, and typed.

And yesterday it began. 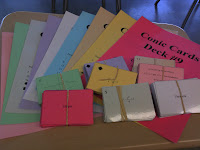 The idea is that the kids are given a deck of cards with equations, graphs, and "information" about the four types of conics.  They use their reasoning powers (and a little guidance from a packet) to match up an equation with its graph with its information.  It's a great idea (I thought) and put a lot more of the learning on the kids.

It didn't go that great.  See that last sentence I wrote?  It put a lot more of the learning on the kids.  Some of them had some big issues with that.  They're so used to being spoonfed what they're learning that they didn't even know where to start.  I did a lot of walking around to groups and explaining things.  (And I freely admit to the spoonfeeding...that's definitely something I need to work on early next year. Be less helpful.)  Today they came in; we reviewed the idea of the parabola and how everything fits into the equation, and everyone was happy.  Today's lesson was on circles and everyone knew what they needed to do.  They were able to match up the parabolas and then worked on the circles with no problems.

Much much happier today - them and me.

(Let's not talk about the one boy who sat and played with my rubber band the whole time.)
Posted by KFouss at 2:55 PM

Wow, this sounds great! Good for you making the shift to being less helpful.

FWIW, I am also noticing a cultural shift around all this. While I've been becoming less and less helpful, my students have become more and more vocal about the contrast between this shift in *my* teaching style as opposed to that of my colleagues.

This reminds me of the comparative parent whining I did when I was an adolescent -- something along the lines of, "But *Petunia's* parents let *HER* do such and such!" But in my students' case, it is more like, "But *Petunia's* teacher doesn't make THEM figure out everything for themselves!"

And I notice that I am getting better and more skillful about simply letting them say this, nodding and acknowledging it, but not reacting -- in other words, not biting the hook.

I think it may take a couple of generations of students passing through before my style of being less helpful is simply accepted as one of the facts of being a student wherever I am a teacher: something kind of like the floor plan -- perhaps poorly laid out or inconvenient but simply a quirk of our school (and of my classroom).

Thank you for sharing your experience! I am happy to hear the second day was better. And I think it is funny how all students are the same everywhere -- I always have at least one who can't stop playing with the rubber band. Next year, I am putting the cards in zip locks. :)

Thank you so much for sharing about the Conic Cards. I know that the cards have forced my students to look for patterns and use the patterns to problem solve. Feel free to share my email with anyone interested in receiving the Conic Cards.

In Algebra 2, it took me 2 years to get comfortable with the Conic Cards. Just take it one step at a time. In my second year, I taught Pre-Calculus and realized that my students had a very strong foundation in the understanding of Conic Sections!!

Would you mind passing those files on to another math teacher who will have about two weeks to cover conics at the end of the year?? Jkennebeck@hlv.k12.ia.us
Thanks!!!!
Julie Kennebeck