Now all I need is a leprechaun.

We had a snow day yesterday and a 2-hour delay today, and coming in for 30 minute classes on a Friday doesn't help a whole lot when you're trying to motivate kids to work.  I'd originally planned on talking about vertex form of a parabola in Algebra 2 (we've been completing the square the past couple of days) but knew it just wouldn't get done today.

So on to plan 2!  After looking for one of those "joke" worksheets to review competing the square I thought I'd try some group work (ala @druinok) via index cards.  I decided to write problems in varying degrees of difficulty... those with an "a" value, those without, those that would result in fractions, etc.  I pulled out my Sharpies to start writing and what did I discover?

I have a rainbow of sharpies.  Isn't that awesome?  So instead of doing random colors a certain difficulty, I decided to take advantage of my colors and made a rainbow. 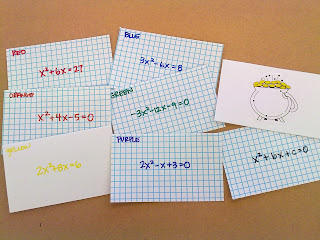 I'll let the kids decide which level they want to start with - I know some don't need the red/orange and could jump straight to yellow/green.
And doesn't every rainbow have a pot of gold?
Mine is completing the square of x^2 + bx + c(and if they can do that, I'll add in an a at the beginning) for bonus points.

I even laminated the cards. :)


Here's the document I'm going to give the kids:
A2 CtS Rainbow

(Edited for spelling.  Did you know sharpie is Ie and not Ee?  Did you know leprechaun is leprEchaun and not leprAchaun?  Geesh.)
Posted by KFouss at 11:44 AM

Wow - yours is so much more colorful than mine - and cuter! A pot of gold - what a great idea! I like the laminating idea too so it is good for next year. I am not quite with that "thinking ahead" thing yet. I'm just running to stand still right now.

And, I love your spelling errors! I am THE WORSE speller - ever. It must be a great math teacher attribute?

I like your concept for making this practice more like a game. My only question is how do they "win"? What do they get when they get the "gold"?

It'd be cool to make more "gamey" by making a rainbow track board. Players can move along a color track by doing problems of the color they're on, or they can move up or down by doing problems of adjacent colors. Then one player is the leprechaun running around the track, and the other player is trying to catch them. Maybe some cards have two problems on them but if you do both of them you can move two spaces.

That does sound like fun! I was just happy to have created this last minute for the kids to work on :) It was nice for them to be able to pick a level to start on, so kids who needed extra practice (and knew it) could start lower, while the kids who were a little more advanced could begin with the tougher problems. (Differentiation, anyone?) Their reward for getting the pot of gold question(s) correct were bonus points, so they were pretty happy with that!

I totally used this activity last school year and never said "thank you." So sorry about that! It worked out great. I came back today to let you know I made two more versions, one for factoring polynomials and one for solving systems of linear equations in two variables, to use after state testing this week. Thanks for the idea.