Today was our viewing today for the precalc projects.  At last count I had 12 games, 9 glogs and xtranormal videos, 2 prezis, 8 self-made videos, and a live skit in class.

When the kids came in the room I had about 7 laptops out on one side and the homemade games out on the other side.  The kids with the computers were to go to our class blog and check out the livebinder that I'd assembled with all of the turned-in projects (glogs, prezis, xtranormal vids, and one jeopardy powerpoint).  I gave them each 2 evaluation pages to report back on what they thought of the different products.

The kids with the games were asked to play the game for a few minutes and rate what they thought of the directions, formulas, construction, and whether the game was fun or not.  After 10 minutes or so the students switched sides so everyone would have a chance to check out both types of projects.

Then we all came back together and I started showing the videos that had been made.  It was an interesting collection - a western (which had basically nothing to do with math), a couple of videos showing the Sinbad/Cosette story I'd told them to help with the sum & difference formulas, and several song parodies.  (One was to the song "I Just Had Sex" which I'd never heard... not sure it was the best choice. They changed it to "I Just Did Math.")  Although none of the videos were what I would call awesome, I'm still amazed at what these kids can do with a video camera!  Amazing.  A couple of groups put their videos on youtube (check out this one and this one) and I uploaded another one because it was so big I didn't want to save it to my computer.

What did I learn?  A few things.
1.  I saw a lot of the kids work harder in the past few days because they had a choice of what to do.  And they enjoyed it.

2.  The amount of creativity that was shown was impressive.

3.  You still have those kids that would rather do a worksheet and take a quiz.  But I was one of those kids in high school, so I don't blame 'em.

4.  Some kids will go all out in anything they do. 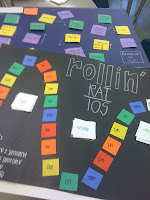 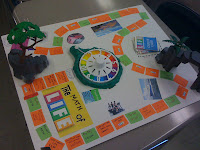 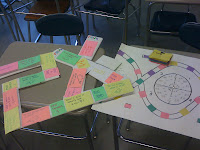 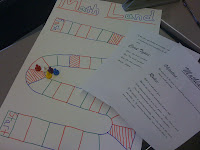 I made them update me each day with a google form I put on the class blog. That was really helpful and it helped them to know they were accountable for making progress!  I also asked them to give me some feedback on the overall project. Everyone said they enjoyed it; most said they learned their formulas more. Of course there were some naysayers (but there always are). I honestly wonder if they know the formulas any better, but from some of the work that was turned in, there was some definite learning going on.  Some not so much.

Oh, and I made it as a contestant in the Game of Life. (changed to The Math of Life) I don't know if they're calling me a nerd or trying to show how much of a nerd I'm not. I'll go for #2. :) 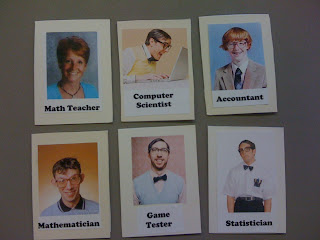